Find the most popular and healthy Korean soup recipes here. Korean soups are nourishing and comforting, and they are an essential part of Korean meals. Whether it is a light soup to accompany a main dish or as a main dish itself, you will discover many soup varieties that will soothe your soul.

It is common practice in Korean households to include a steaming hot bowl of soup as part of their daily meals. Korean soup is a hallmark of a Korean home cooked meal.

These Korean soups can accompany the main dish or can be considered as the main dish itself. Korean soup recipes are quite diverse in variety and flavors, but generally they can be divided into three categories:

Korean stews called Jjigae (찌개) fall into their own separate category. Jjigae is thicker and tends to be heavier than guk (soup).

This list includes popular Korean soups enjoyed in Korean homes. Most of them are easy and quick to prepare, full of flavor and umami. If you are looking for a healthy Korean soup, you will find it here.

Learn how to make these traditional soups with my easy Korean cooking method at your home. 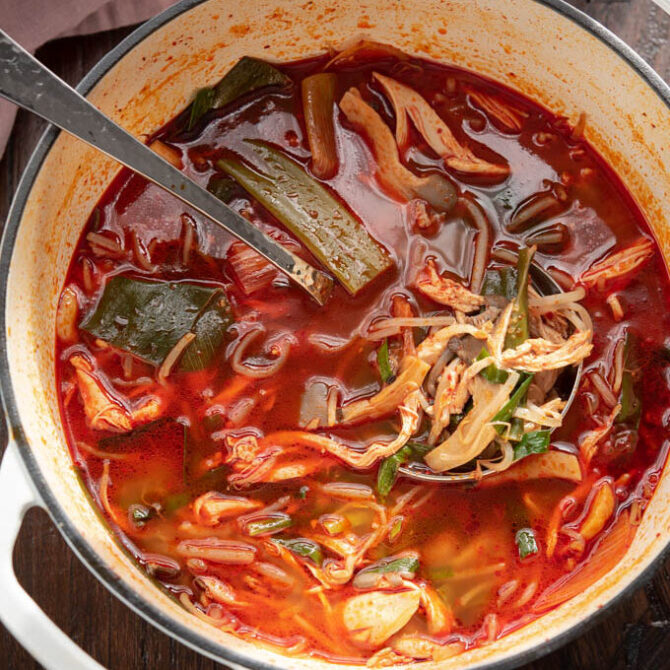 This spicy Korean chicken soup (dakgaejang) is delicious and full of flavor! With plenty of vegetables, like leeks and mushrooms, this recipe is nourishing and comforting. Plus, learn my secret tips to keeping the broth bright red.
Get Recipe 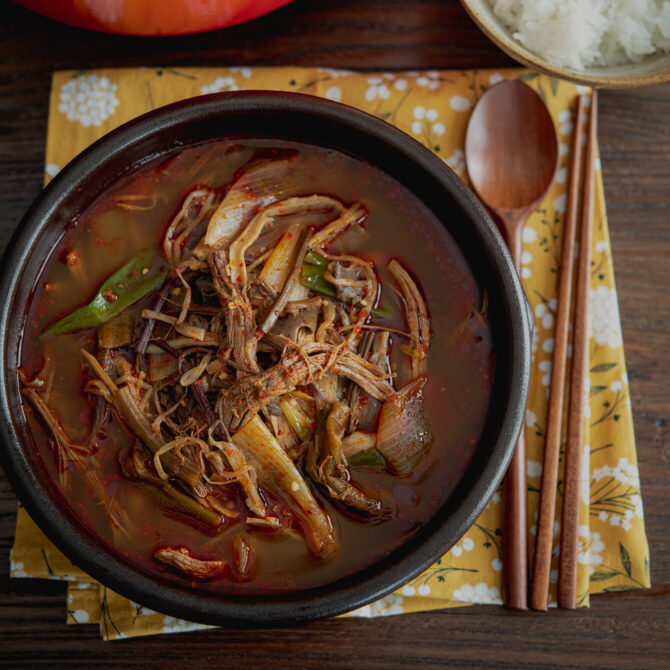 This authentic homemade recipe for Yukgaejang (spicy Korean beef vegetable soup) is deeply flavorful and comforting. I’ve included step-by-step photos and my top tips for making this satisfyingly spicy beef stew at home in your own kitchen.
Get Recipe 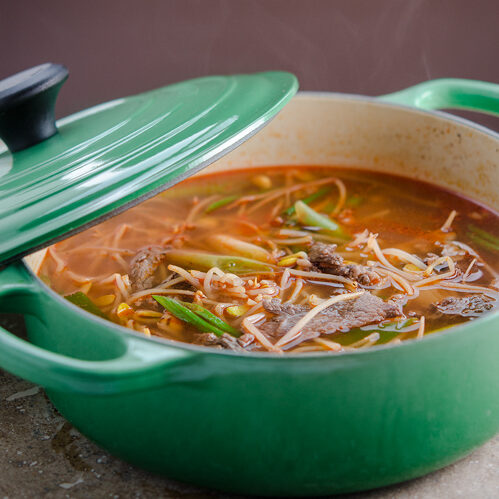 Lean beef slices are quickly simmered with bean sprouts in a spicy broth, this beef and bean sprout soup brings a Korean comfort when you need it. serve with rice and kimchi.
Get Recipe 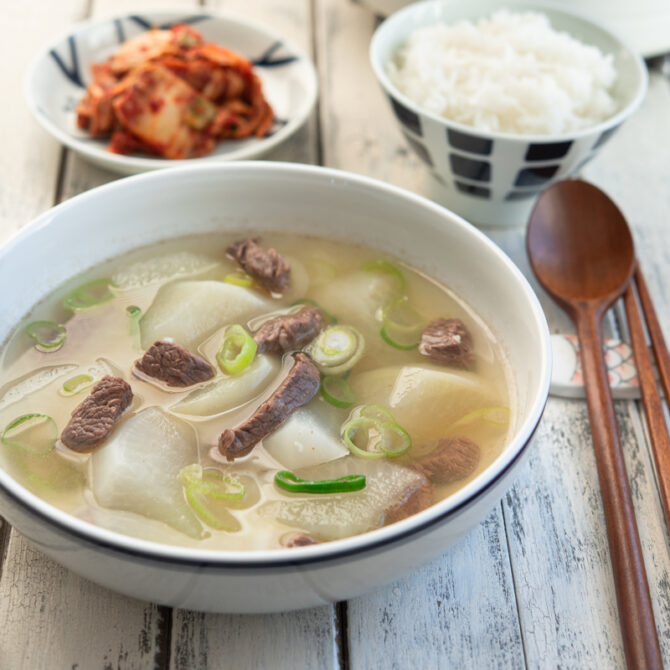 Korean beef radish soup is a comforting soup that is often served in winter time in Korea. It's worth to look for Korean radish to get the mellow flavor of the soup. Gluten-free!
Get Recipe 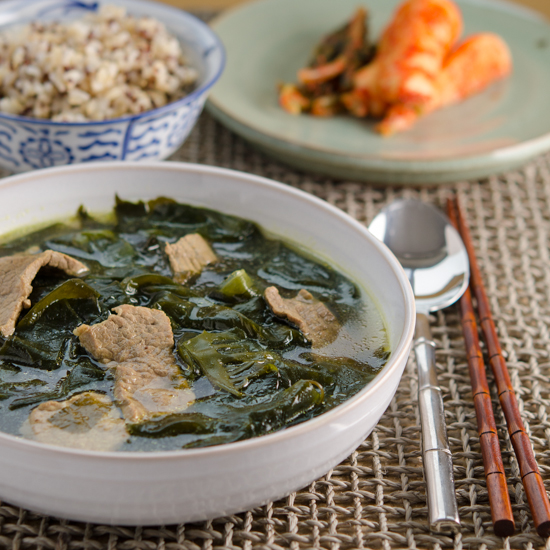 A delicious and healthy Korean beef seaweed soup recipe. It has flavorful broth with tender beef and soft seaweed. Ready in 30 minutes.
Get Recipe 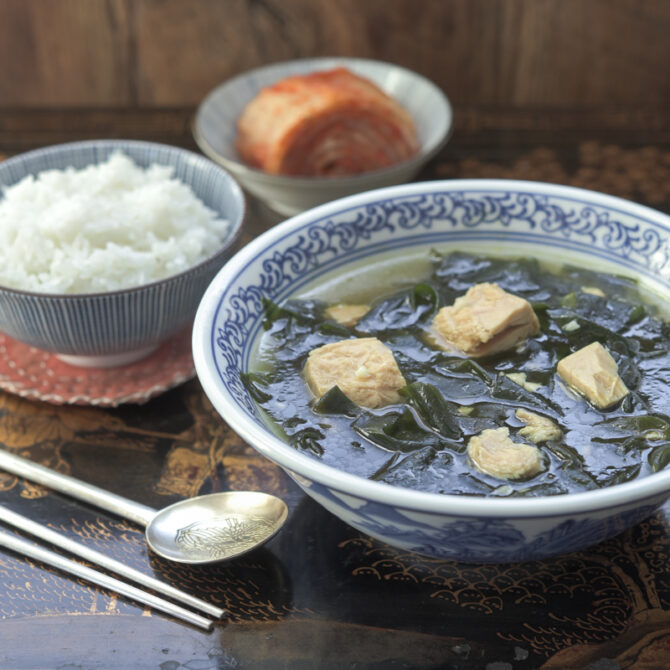 This simple Korean seaweed soup is very easy to make. A canned tuna comes in very handy to make this tasty Korean birthday soup.
Get Recipe 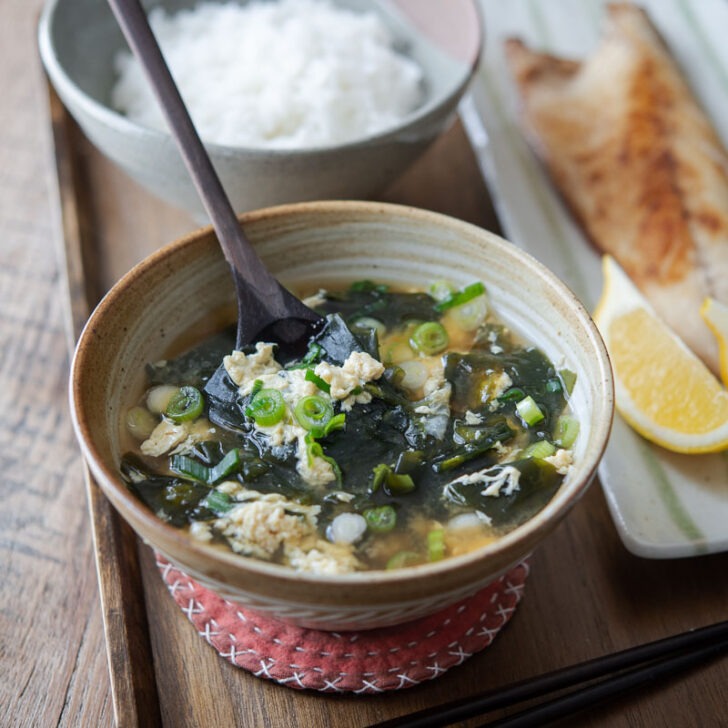 Seaweed egg drop soup is light and healthy soup often served as a quick breakfast soup in Korea. This low calorie soup is easy to prepare with just a few ingredients.
Get Recipe 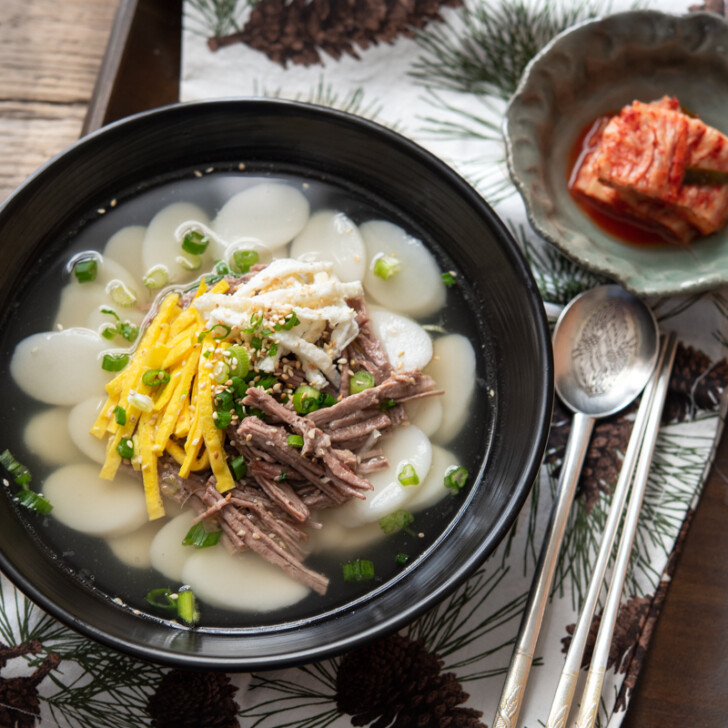 Tteokguk is a popular Korean rice cake soup enjoyed by many for Lunar New Year's Day. Soft and chewy rice cakes are simmered in a flavorful broth made with beef and vegetables.
Get Recipe 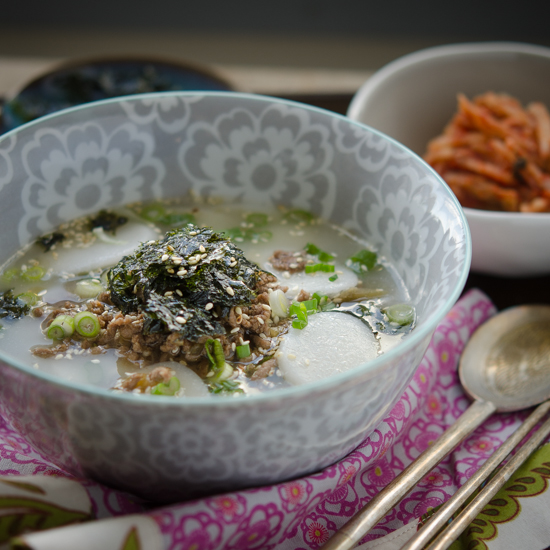 This ground beef rice cake soup recipe is easy and you don't need to make soup stock separately. The soup is still flavorful but only easier to make.
Get Recipe 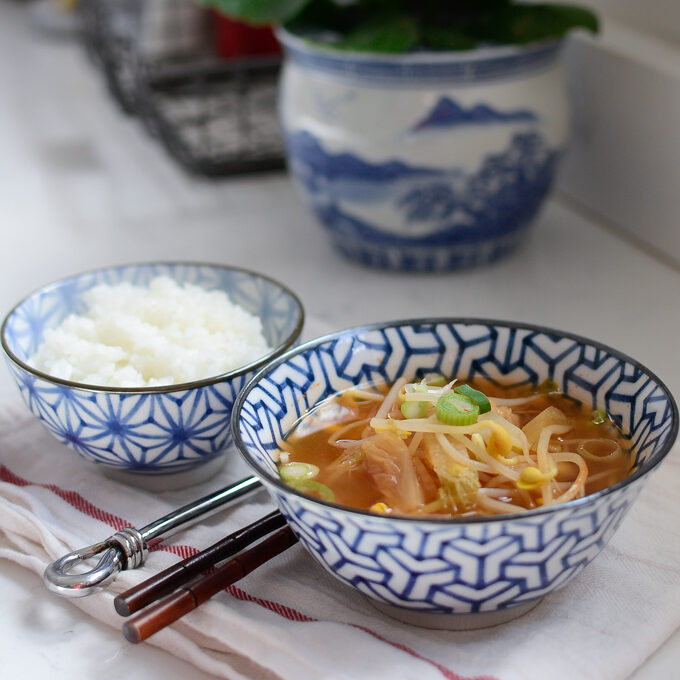 Using anchovy stock as a soup base, this soybean sprout soup with kimchi is a popular hangover soup in Korea. Use very sour cabbage kimchi to get a salivating taste.
Get Recipe 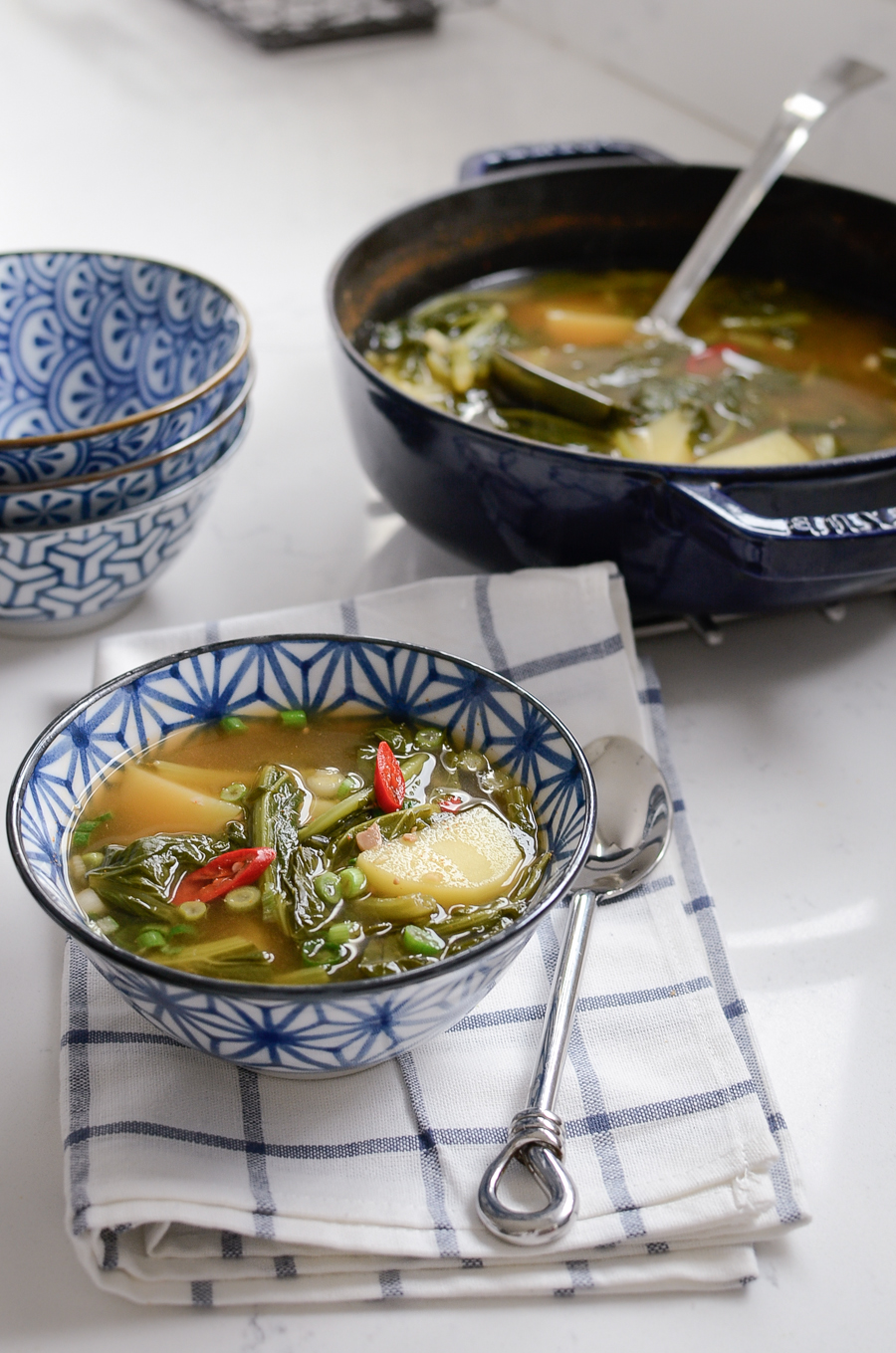 Korean turnip green and potato soup makes is homey and comforting. Korean soybean paste deepens the flavor of broth and makes it delicious to serve with rice.
Get Recipe 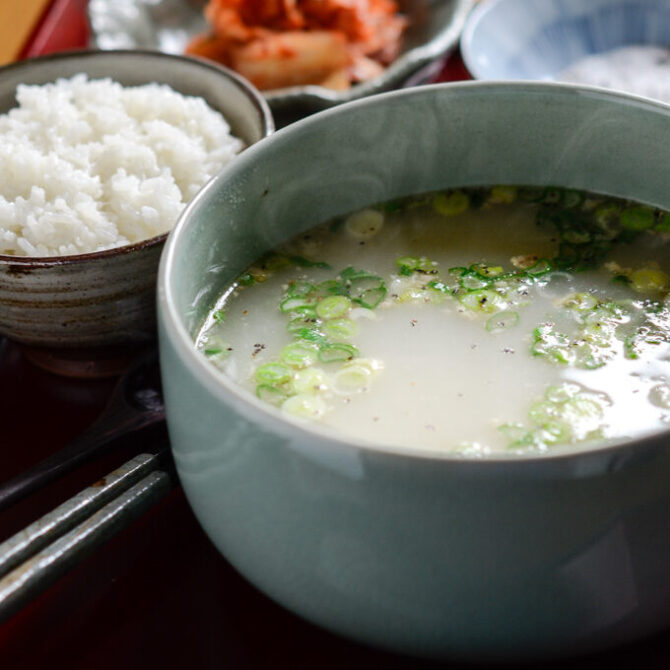 Korean ox tail bone marrow soup is full of collagen. All you need to do is to add water and simmer for hours. Serve with rice and kimchi.
Get Recipe 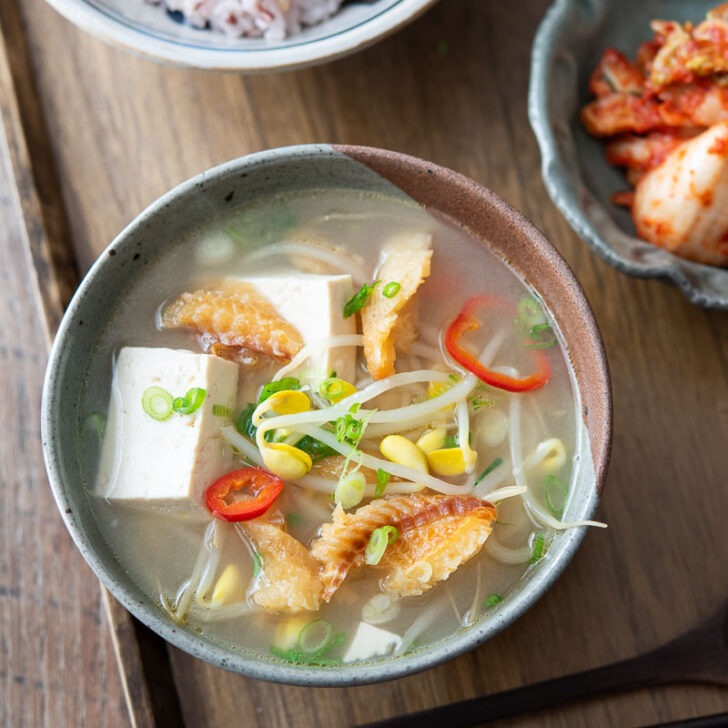 Dried pollock fish is simmered with soybean sprouts and tofu in a flavorful stock to make a light Korean style hangover soup. It takes only 15 minutes to fix this breakfast soup.
Get Recipe 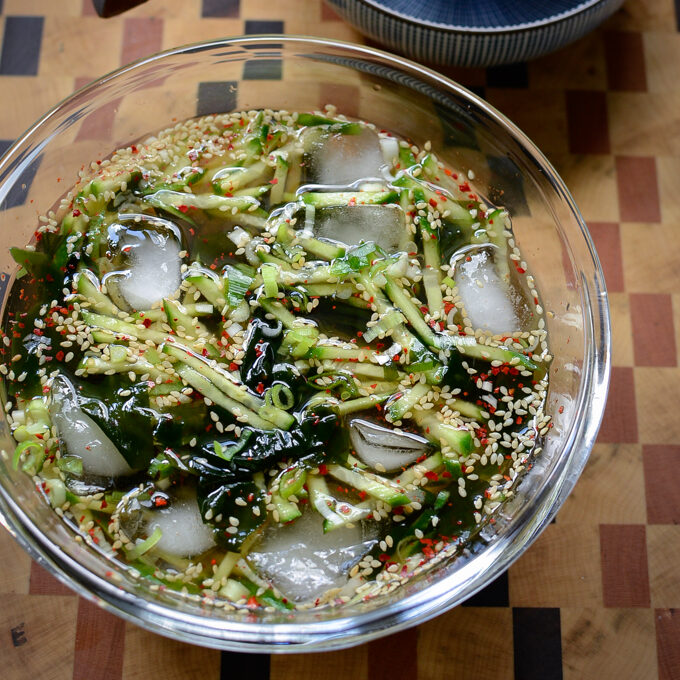 This cold Korean seaweed and cucumber soup (ooi miyuk nangguk) is a popular summer side dish. The tangy refreshing flavor of the broth will help cool down the summer heat. No need to cook!
Get Recipe 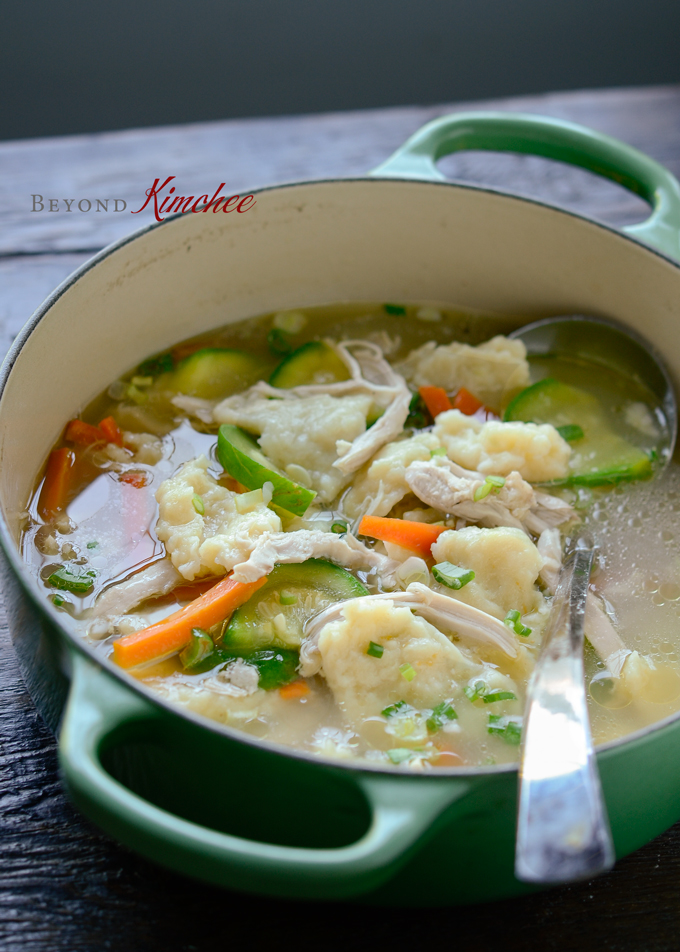 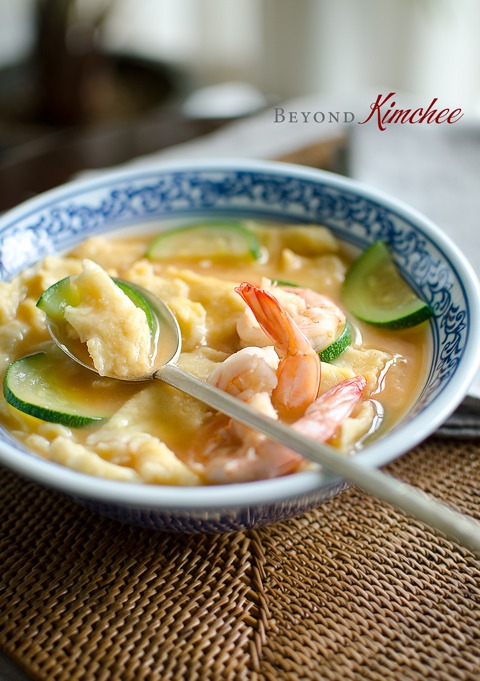 This Korean style corn dumpling soup with shrimp is made with Korean soybean paste broth. Shrimp ans zucchini makes the dish a complete meal.
Get Recipe 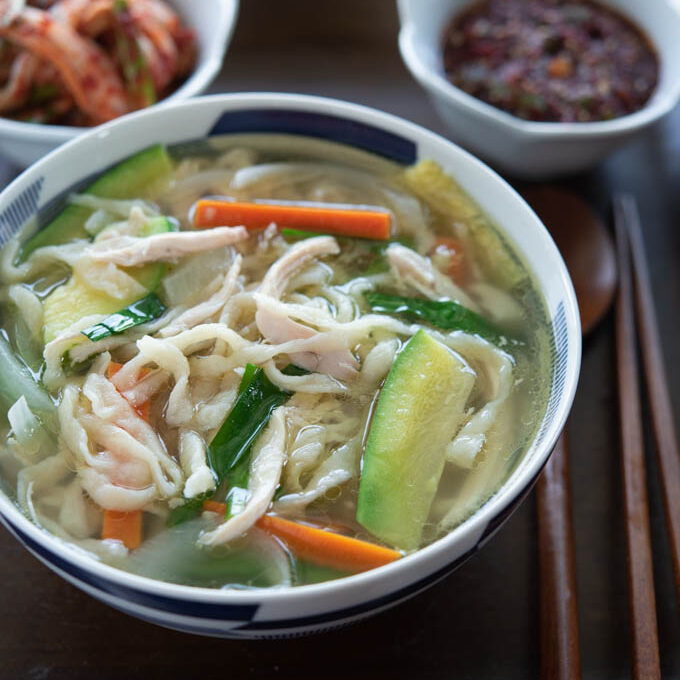 This comforting Korean soybean paste soup (doenjang guk) is made with beef, watercress, and chives. It's flavor is light yet robust, appropriate to enjoy any time of the day.
Get Recipe 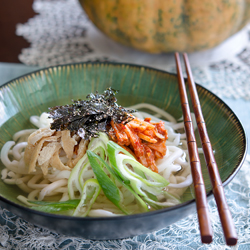 Chewy udon noodles and savory kimchi in a Japanese dashi broth makes a perfect simple noodle soup for a comfort. It's a simple and easy Korean-Japanese fusion noodle soup recipe.
Get Recipe 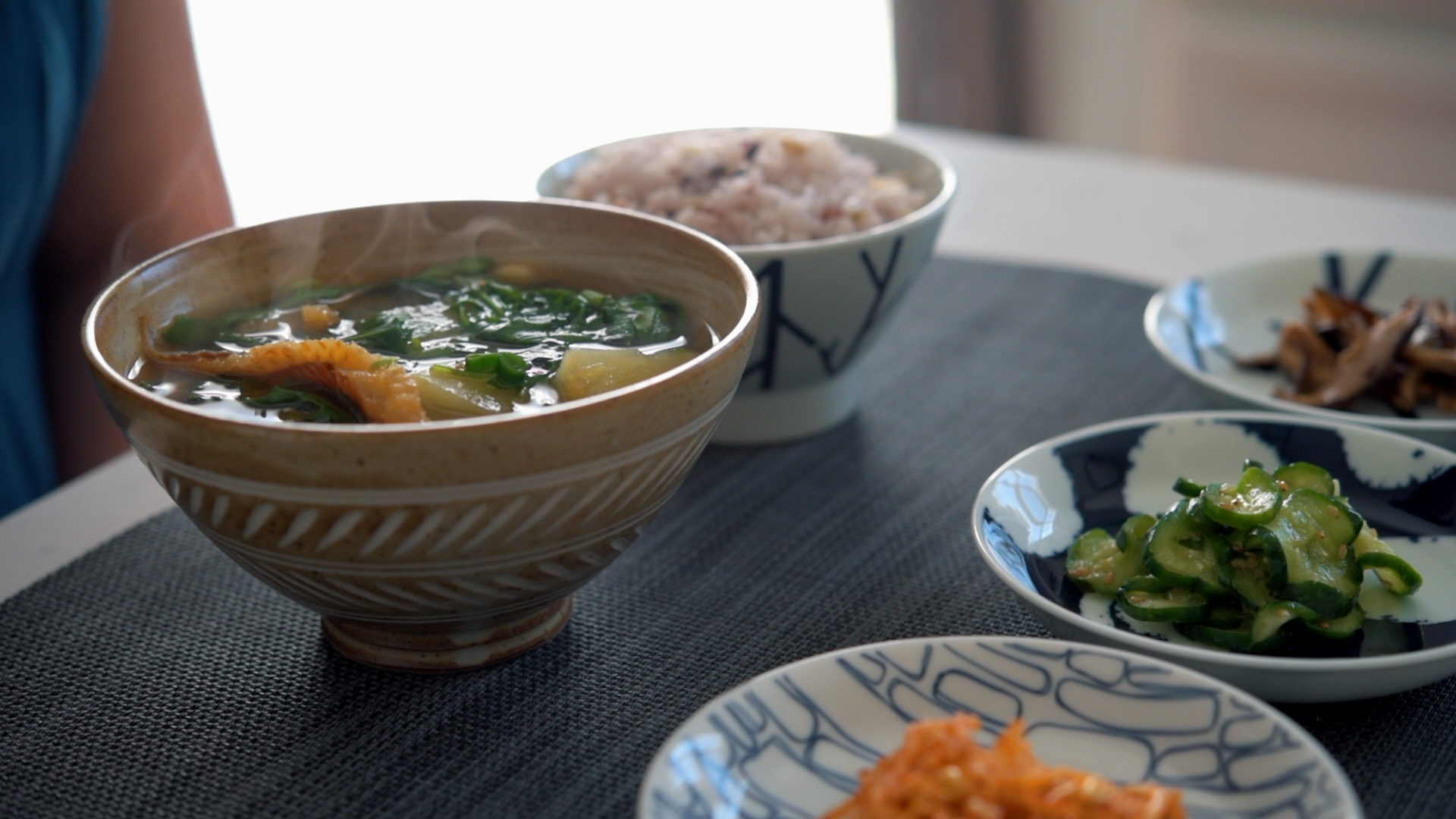 This quick Korean soup with arugula and potato is flavored with dried pollock fish and Korean soybean paste. Use any green leafy vegetables in place of arugula
Get Recipe 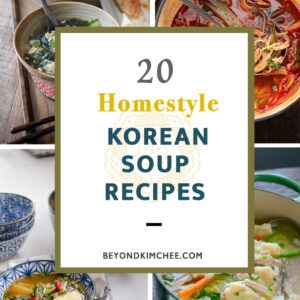 Korean radishes are easily found in most Korean stores. If not available, use daikon radish and add 1 teaspoon of sugar to the soup when simmering.
Cuisine: Korean
Course: Soup
Author: Holly Ford
Did you make this recipe?Tag @beyondkimchee on Instagram. I love to see your masterpiece.
Soups and Stews