You are here: Home > Side Dishes > Korean Spinach Side Dish (Sigeumchi Namul)

Korean spinach side dish is a classic banchan in Korean cuisine. There are two different ways to make this delicious and simple Korean spinach recipe: one with soy sauce and the other with gochujang. Learn how to make them both and see which one you like better. Video tutorial included.

Korean cuisine is known for its variety of side dishes called banchan. And out of so many delicious choice, this Korean spinach (sigeumchi namul, 시금치나물), along with soybean sprout side dish, is one of the most popular side dishes that shows up on a Korean dinner table over and over.

Mainly because they are not only delicious, but easy and quick to make. There are two classic Korean spinach side dish recipes you can try.

The first recipe with Korean soup soy sauce is perhaps the most common spinach side dish recipe, and you will find many Korean restaurants serving it.

This spinach side dish recipe is a great base for making the famous Korean rice bowl with vegetables (aka Bibimbap)!

The second recipe originates from Gyeonsang province in South Korea – where I am from. It is more often regarded as a local favorite, but many other Koreans love making their spinach banchan this way. This is my mother’s Korean spinach recipe and I always loved it.

I will share both recipes for a delicious and simple Korean spinach banchan. I recommend that you try both recipes and see which one you like better.

Just to let you know, these Korean spinach recipes are not limited to serve with only Korean meal, but they are also suitable to make as an Asian spinach recipe for other Asian cuisine.

How to clean a bunch of spinach

A bunch of whole spinach holds a lot of dirt trapped inside. The best way to clean them is to immerse them in water for 1 minute so that the dirt will sink to the bottom of the bowl you are soaking in.

Make sure to use a bowl big enough to contain the entire spinach. Then drain and rinse the spinach a couple more times to clean throughly. Put them in a colander to remove excess water.

How to make Korean spinach side dish (2 ways)

Step 1. Bring a pot of water to boil. Add some salt and the spinach to the water; blanch for 30 seconds. Drain the spinach in a colander and rinse under cold water until all the heat from the spinach has been cooled.

Step 2. Squeeze the spinach firmly to remove excess water. Place spinach on the cutting board and cut the spinach into 3-inch long pieces.

Step 3. Place them in a medium mixing bowl. Add Korean soup soy sauce, garlic, sesame oil, and sesame seeds. Toss with your hand to incorporate the seasoning into the spinach. Watch my video tutoria to see how I do it.

#2: Korean Spinach Side Dish with Gochujang

Step 1. Blanch the spinach following the instructions above (step 1 and 2). Cut and place them in a mixing bowl.

Step 2. Add gochujang, doenjang, garlic, sesame oil, and sesame seeds. Smear the Korean pastes together with your fingers to mix them first, then toss everything together to incorporate the seasoning into the spinach. Watch my video tutorial as a reference.

What to serve with Korean spinach Side Dish

Each of these two spinach banchan goes with any Korean main dishes and any Asian dishes as well. Here are a few of my favorites:

How to store spinach Banchan

Store in a container in the refrigerator for up to 1 week. You can serve them chilled right out of fridge. Do not freeze. This dish doesn’t freeze well.

This post was first published in Feb, 2012 and has been updated with additional write-up, images, and a video. 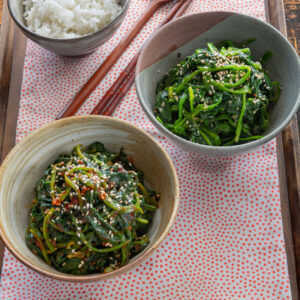 Servings: 4 people each
Prep Time: 15 mins
Cook Time: 5 mins
Total Time: 20 mins
Korean spinach side dish is a classic Korean banchan. Here are two recipes you can choose: one with soy sauce and the other with gochujang. Learn how to make them both and see which one you like better.
5 from 2 ratings
Print Recipe Pin Recipe Leave a Review

For soy sauce spinach side dish

For gochujang spinach side dish

To clean and blanch the spinach