Bulgogi is a classic Korean BBQ beef that everyone loves. This authentic beef bulgogi recipe uses thin slices of beef with a flavorful marinade. It cooks fast and your meat will be so tender and juicy. Treat yourself to one of Korea’s most popular dishes with this easy recipe. It’s a best!

“This was divine…..I think your special sauce and not adding the veggies right away helped make this one of the most beautiful bulgogi ever!”

As a native Korean, I have eaten beef bulgogi all my life. When the thinly sliced beef marinated in a flavorful bulgogi sauce hits a very hot skillet or griddle on an open flame, it reminds you the smell of your favorite Korean BBQ restaurant.

I have never met anyone who would not like Korean beef. Who can refuse the tender flavorful beef in a savory sauce? It is a killer dish to serve with rice.

Whether you serve it as a signature main dish or as a simple Korean beef bowl, it’s all Korean heaven!

It literally translates into fire meat, which means meat cooked over fire – the title, Korean barbecue, comes from that.

In ancient days, Koreans cooked their meat directly over the flame in their outdoor kitchen. They grilled the meat by putting a layer of thinly sliced meat between two mesh screens and holding it over the fire. Grilling this way incorporates the smoky flavor from the BBQ and yields a super delicious result.

However, in modern-day Korean home cooking, people have adapted to cooking bulgogi in a skillet instead of barbecuing outdoors (not every household has an outdoor kitchen).

Not all Korean bulgogi are created the same. The cooking method of bulgogi varies one region to another in Korea.

Thinly sliced beef is marinated in a flavorful sauce. Traditionally, bulgogi requires a few hours of marinating time to tenderize the beef and to allow the beef to soak up all the flavor from the marinade. Some like to add mushrooms and vegetables – such as carrot or pepper – along with the beef. I am not a huge fan of that. I like my bulgogi to be truly beef only (with a little bit of green onion or leek for the flavor).

Unlike the Korean beef that most people know, Seoul-style bulgogi uses broth made with sea kelp stock in the marinade. The beef is cooked on a special dome-shaped pan with holes and a flat bottom. The dome shape allows the meat drippings and broth to flow down. The broth is so tasty to drizzle over rice. People often cook Korean noodles (dangmyun), mushroom, and vegetables together with this Seoul style Korean beef. I shared my recipe in my cookbook, Korean Cooking Favorites, so check it out!

Unlike Seoul-style, crispy bulgogi doesn’t yield any juicy broth. It has a crispy texture on the outside. This cooking method is common in South Korea’s Jeolla Province. Check my Crispy Korean Beef to get the recipe.

Although it is not part of traditional Korean bulgogi category, bulgogi made with ground beef is a popular recipe to make a quick Korean beef bowl.

What cut of beef is used for Korean BBQ

Korean barbecue commonly use thin slices of tender beef cut. Rib-eye or sirloin are the best cuts to use for this bulgogi recipe. You can purchase it any Korean store or well stocked Asian grocery store.

Korean-cut frozen beef slices: You can find them easily on the frozen section of Korean grocery stores. Make sure to thaw it ahead of time. It might take a full day in the refrigerator if it is frozen solid.

Alternatively, if you can’t find pre-sliced beef, freeze a chunk of beef sirloin for 20 minutes to slightly firm it up. Then slice it very thinly against the meat grain.

Korean beef bulgogi is all about the marinade and you will need the best bulgogi sauce to maximize the result. Homemade bulgogi sauce tastes so much better than the store-bought kind.

It is easy to make homemade bulgogi marinade, but you’ve got to plan ahead so that you will have enough time to marinate the beef – at least 4 hours to overnight.

How to make Beef Bulgogi

Step 5. Cook beef in its own marinade sauce.

What to serve with Beef Bulgogi?

If you like it as a simple one bowl meal, as a Korean beef bulgogi bowl, top it on the white rice and kimchi (or other vegetable side dish) on the side all together in a bowl.

Want to fancy things up? Try it with lettuce leaves and ssamjang to make wraps. Doenjang jjigae on the side will make the whole meal very authentically Korean.

Don’t forget to serve a few simple Korean side dishes alongside. Here are my suggestions: 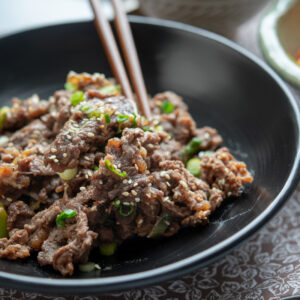 Servings: 8
Prep Time: 15 mins
Cook Time: 5 mins
Marinating time: 4 hrs
Total Time: 4 hrs 20 mins
Bulgogi is a classic Korean BBQ beef made with thin slices of beef and a flavorful marinade. This authentic beef bulgogi recipe cooks fast and your meat will be so tender and juicy. No oil is needed to cook.
5 from 8 ratings
Print Recipe Pin Recipe Leave a Review

This recipe was originally posted in November 2010. I’ve updated the recipe with minor changes, new photos, and more information.