Korean cucumber kimchi (oi-sobagi) is an essential summertime Korean side dish. This traditional cucumber kimchi recipe helps the kimchi to ferment well and stays crisp until you’ve eaten the entire batch, not to mention how easy it is to make at home.

Summer is a great season to make quick Korean cucumber kimchi – a popular summer side dish (banchan) in Korean cuisine. If you have not tried, I urge you attempt. You will soon learn why so many people are getting hooked on kimchi made with cucumbers.

Why you’ll love this recipe

Not all cucumber kimchi recipe is created equal. Sure, they all start out with a crisp texture at the beginning. However, as the kimchi ferments, it tends to lose its crunchy texture, and sometimes the kimchi becomes mushy.

But not with this recipe for cucumber kimchi! You can maintain the crunchiness all the way through even after the kimchi becomes very fermented. You will enjoy every bite of this delicious kimchi until you finish the entire batch. That’s the way authentic kimchi recipe should be.

Which will stay crunchier longer? Definitely the Oi-sobagi.

Why you should stuff cucumber kimchi

It is almost like having spicy cucumber pickle, but in Korean taste!

The cut-up cucumber makes a quick kimchi and it is easier to prepare, but it ferments faster and often becomes mushy quickly. If you wish to consume your cucumber kimchi within a few days, it doesn’t really matter whether to stuff it or cut it up.

However, if you prefer to enjoy the real crunchy and full-bodied flavor, go with traditional stuffed cucumber kimchi recipe. It’s the way an authentic cucumber kimchi should be, and it’s easy to make.

What cucumbers to use

How to make Cucumber Kimchi

How many cucumbers to use? It depends on the type of cucumbers — 8-10 for Kirby cucumbers, 5-6 for Korean cucumbers, or 4 for English cucumbers.

Cut through a cucumber in a cross pattern, but leave one end of the cucumber uncut.

Combine water and salt; bring to boil. Pour the boiling salted water over the cucumbers in a mixing bowl.

Put a weight on top of the cucumbers so that they stay immersed in the salt brine. Let them sit for 1 hour, then drain.

Stack the stuffed cucumber kimchi in an airtight container and cover.

How to ferment and store cucumber kimchi

Cucumber kimchi is ready to eat right away if you like the fresh taste. If you prefer them to ferment fast, leave the kimchi at room temperature for 1-2 days, then keep them in the refrigerator after that. The kimchi will continue to ferment slowly in the fridge .

How long is cucumber kimchi good for? If you want your cucumber kimchi to ferment quickly, let the kimchi sit on the room temperature for the next 2-3 days. It should be ideally fermented. Then store it in the refrigerator and try to consume within 2 months.

What can you serve with oi-sobagi

Cucumber kimchi is a great summer kimchi, Therefore it can go with any dishes that you enjoy during the summer. However, don’t limit this tasty kimchi for just for the summer. It is perfectly delicious all year round. Here are a few dishes I suggest:

This recipe was originally posted in June 2011. I’ve updated the recipe with a few changes, new photos, and more information.

Making authentic Korean kimchi is not that difficult with these easy kimchi recipes. Some of my favorites are: 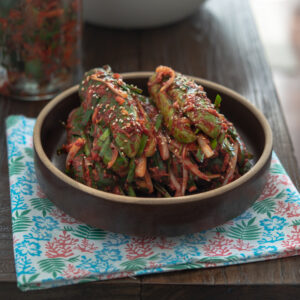 Servings: 12 people
Prep Time: 25 mins
Brine time: 1 hr
Total Time: 1 hr 25 mins
In this post, I teach you how to make cucumber kimchi (oi-sobagi), which is an essential summer kimchi in Korean cuisine. This tratitional kimchi recipe is easy to make at home. The stuffed cucumber kimchi ferments well and retains its crispness all the way through. Step-by-step instructions and video included.
5 from 4 ratings
Print Recipe Pin Recipe Leave a Review

To store and ferment cucumber kimchi