Have you tried spicy Korean sea snail salad? It is often served with cold vermicelli noodles on the side and it becomes a satisfying meal for lunch or dinner.

I have a feeling that today’s recipe will be either LOVE it or HATE it type. It is all about the snails, the edible kinds.

Actually the word “snail” for this dish is not the right translation. The sea snails I used for this recipe in Korean is called “골뱅이, golbangyi”.  The snail in Korean is “달팽이, dalpangyi”. I couldn’t find the right English word for golbangyi, and the next close thing is the snail. So I will call this recipe the Spicy Korean Sea Snail Salad, 골뱅이 무침 (golbangyi muchim).

If you happen to know the Korean Golbangyi in English, please share.

Koreans do eat a few kinds of snails but not all. Golbangyi is perhaps the most popular among them and it is mostly consumed from a can. Fresh golbangyi is available sometimes but it is a pain to get the meat out of the shell if you know what I mean.

Golbangyi is delicious. Its texture is similar to clam. So if you like clams, you won’t have a problem with golbangyi.

I made spicy salad with my canned friend. This salad is quite popular during summer month and often serve with thin wheat vermicelli. If you truly love Korean noodle dishes and love what the locals eat, you will love this salad.

BTW canned sea snails are available in most Korean grocery stores and they are very affordable. So why not try something unusual for the sake of summer?

Drain and reserve a little bit of its juice. Rinse the sea snails once. I like my sea snails in big chunks. You can cut off to small piece if you prefer.

Slice all the vegetables.

Put everything in a large mixing bowl.

this special ingredient I use often in Korean salad. This the Korean green plum extract (maeshil jeup). You might be able to find this golden syrup in a big Korean store.

If you can’t find it, omit it. Instead use the reserved 2 tablespoon of sea snail juice from the can.

Mix everything to make the sauce.

Pour the sauce over the sea snails and vegetables in a bowl. Mix with the divine kitchen tool that was given to you from the heaven – your HAND!

Taste it! Then, adjust the seasonings as you like. You can eat the salad alone but try mixing with thin wheat noodles to make complete meal.

Cold and refreshing! You’ve just got one exotic meal of the summer to remember. I gave a little portion to my children as a lunch. It was spicy but they liked it.

“These clams are very delicious, mom!” My 12 year old daughter said as she was drinking a cup of milk to neutralize the spiciness. I felt a little guilty because I told her it was clam. Otherwise she would have refused to eat.

So someday, when she reads this recipe post… “Sorry to lie to you, darling! It was not what you thought it was. But remember! — you liked it.” 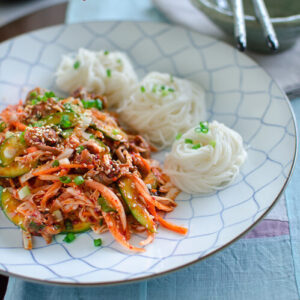