Blackened salmon tacos meet Korean radish salad. This Korean-Mexican fusion tacos have the crunchiness of Korean radish to the taco. Serve with pico de gallo and other toppings of your choice.

I love blackened salmon, so I combined with Korean radish salad in a taco form. The crunchiness of Korean radish adds delightful texture to the tacos.

The gentle heat form the radish salad adds a gentle spicy kick to the taco and works very well. with the blackened salmon. Topped with fresh Pico de Gallo, this salmon Korean radish taco is another win for Korean-Mexican fusion style tacos.

WHAT’S IN THE TACOS?

Grilled Salmon – mixture of garlic powder, onion powder, cumin, oregano, paprika, and salt & pepper is rubbed on a salmon filet, then cooked in butter on a skillet until it creates a nice blackened crust.

To complement the lovely Korean salmon tacos, I paired them with Korean radish salad. It is a super simple salad that adds irresistible crunch texture to the taco.

The two go together so nicely. You will love it. My family greatly enjoyed the entire batch of Korean salmon tacos I made. They are not even fish taco lovers but couldn’t get enough of this salmon taco. That says something, if you ask me.

CAN I SUBSTITUTE KOREAN RADISH WITH OTHER RADISH?

Korean radish has a slight peppery taste but it also has a sweetness, too. If you can’t find it, you can use daikon radish or young red radish instead. Make sure you slice them very thinly to get the right texture.

HOW TO MAKE KOREAN RADISH SALAD

No Grill Pan? No Problem. Use any skillet you have. Heat the skillet over med-low heat until hot. Add a little oil and sear the salmon until you get the slightly blackened surface. Flip to the other side and do the same.

Check out my seafood recipes for more dinner ideas. 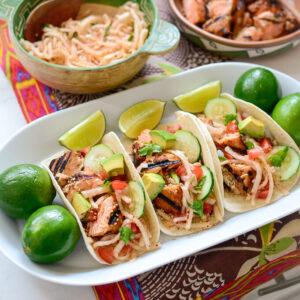 For the Korean radish salad

For the pico de gallo