You are here: Home > Side Dishes > Korean Potato Side Dish (Gamja Jorim)

Gamja jorim is a popular Korean potato side dish. Cubed potato pieces are simmered in a slightly sweetened soy sauce. With only a few ingredients you can make this delicious potato side dish very quickly.

If you like potatoes, this Korean potato side dish called “gamja jorim, 감자조림” would be something you should try. I haven’t met anyone who doesn’t like this gamja jorim once they tried.

Plus, this would be the one of the easiest Korean side dishes (banchan, 반찬) you can make. It is quick to make with only a few ingredients and tastes great.

Potato are cut into cubes and simmered in a slightly sweetened soy sauce. Adding a piece of dried sea kelp is a key ingredient to make this side dish even more delicious and flavorful.

Gamja jorim was one of my favorite side dishes when I was a kid, and I still love it. I bet you will love it, too. And it’s a great Korean vegetarian recipe.

Ingredients for Korean potato Side Dish

How to make Korean Potato Side Dish (Gamja Jorim)

You will need to soak the cubed potato in the water to get rid of some of its starch.

Combine the potato, sauce, and a piece of dried sea kelp. Bring to a gentle boil and cook. You will need to remove the sea kelp after 2 minutes.

The dried sea kelp will add the very nice flavor to the dish.

Reduce the heat to med-low and continue to simmer to soften the potato and thicken the sauce, about 5-7 minutes. I added a fresh green chili to give a little spicy kick to my potato side dish. You don’t need to.

Remove from the heat and sprinkle some toasted sesame seeds.

Here we go, the Korean potato side dish, gamja jorim! This lovely Korean banchan(반찬) is surely pleasing to anyone who enjoys Korean food.  If you like all sorts of Korean side dishes, you should try this gamja jorim.

Keep Korean potato side dish in the refrigerator at all times. It will last up to 1 week. Freezing is not recommended.

Other Korean Side Dishes You Should Try 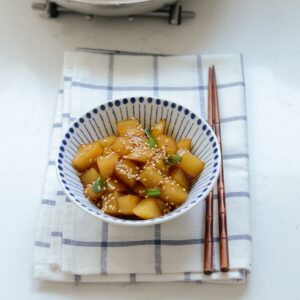